This Mission Report actually begins January 2018 (the previous year) during the G3 Conference in Atlanta, Georgia. FirstLove Publications was attending G3 for the first time as an exhibitor where Mike Reid (pastor of Grace Fellowship Church in Davenport, Iowa), approached Pastor Joe and began a conversation about mission work occurring in areas within Kenya. He knew Pastor Murungi of Trinity Baptist Church (TBC) quite well and was aware of some of the needs in that part of the world. He was hoping that FirstLove might be able to assist in the work there. Fast forward just a little over one year later, after dozens of skype calls and emails back and forth between FLM, Mike Reid, Pastor Murungi, (and sometimes Ryan Bush of International Church Planters) and the team of FirstLove Missions would arrive safely on the ground in Nairobi, Kenya. The team’s first excursion into this part of Africa would be headed by Pastor Joe, Pastor Austin, and … our dear Pastor Tony Okoroh, the Branch Leader for FirstLove in Nigeria and the Pastor of Sovereign Grace Bible Church in Lagos. Pastor Tony had also never been to Kenya before so it provided everyone a unique experience to labor in new territory together.

The scope of FirstLove’s work in Kenya this year was primarily intended to gain insight and experience regarding what kind of needs and obstacles would be present in laboring in the Kenyan context. We were surprised to find a growing and thriving work through various strong churches like TBC. It was encouraging to see the faithfulness and seriousness of the leaders there and their passion for the spread of the Gospel. There were also, however, many similar kinds of difficulties and false teachings present in the surrounding church culture that were similar to what FirstLove has been combating in Nigeria. It is equally necessary here to push back against the myriad of health, wealth, and prosperity variations, easy believism, and religious superstition that is rampant in many of the other nations
With those prevalent needs in mind, it was a blessing to stand alongside strong brothers in the Lord and proclaim an accurate and clear testimony of The Gospel; the “One True Gospel,” mind you. FLM, along with various Kenyan pastors, spoke on pertinent subject matter ranging from “Man’s Depravity”, “The Righteousness of God”, “The Person and Work of Christ”, “The New Birth”, and many other vitally related topics. Even the false gospels were addressed in view of strong Biblical testing and ultimately: rebuke. There were nine plenary sessions and nine workshops total conducted over a period of three days to over a hundred predominately non-reformed and non-baptistic Kenyan church leaders.

Leading up to the conference, and after it, the team spent a good time on live radio as multiple promotional interviews, Bible teaching, and Q&A roundtables were held on 90.7 Truth FM. The team members and speakers addressed the various false teachings and, consequently, the necessary scriptural reproofs to those errors. A provocative foundation of truth was laid over a period of several days as questions were taken and the testimony of the Word was applied. Quite a large number of people responded. Some came to the conference as a result of the radio, and potential ties were formed that would assist FLM in future opportunities for radio ministry in Kenya.

The response from the conference was tremendous. Many of those attending expressed thanks and even deep appreciation for the sermons, the content, and the overall aim of the conference theme. Many new friendships and connections were made, and above all, Christ was preached with plainess of speach and conviction of truth. There were quite a number of meaningful responses. (Below are some of the more noteable quotes and assessments)

You blessed me a lot during the conference. The message was clear, with simple language, easy to understand. It was straight not attacking leaving the hearer and the listener to meditate…That’s it ! May you increase in that grace.”

So sad I missed the “Grace and Truth Conference” held in Nairobi last week. I really feel I missed a precious thing in my life… I heard from a pastor friend of mine who managed to attend that it was so wonderfully awesome!”

“These men need good books! There are many of them who are convicted and convinced their theology and doctrines are wrong. They are anxious to have their minds renewed… literature would go a long way in transforming central Kenya.”

It was my supreme joy to know a kindred spirit, my heart was warmed and my faith stirred, so many more days await Gospel fellowship and partnership…thank you brother for your friendship and fellowship when we ministered together”

A number of books were distributed to each of the attendees at the conclusion of the conference. Not only FirstLove Publications but also Chapel Library of Mt.Zion Bible Church in Pensacola assisted with sending and providing free literature for the conference. As Pastor Mike Reid said, however, “these men need good books… and literature would go a long way in transforming central Kenya.” After the conference, we are again aware of the great need to saturate the mission field with solid, spiritual, and doctrinally accurate books and tracts.
​ The last day of the mission was a very busy one. The team rose early and headed to the radio station for two hours of radio ministry. Pastor Joe began the teaching portion on the radio with a sermon titled “The Righteousness of Christ.” Afterward the panel returned to the normal Q&A style teaching as calls continued to come in from the region with pressing theological questions. After completing the work there, the team split up. Pastor Joe and Pastor Tony would return to TBC and preach the morning and evening services respectively.

Pastor Austin was picked up from the station and taken to an outlying church by the same name as Murungi’s church. The church there is young and helps run an onsite orphanage that was started by an Australian missionary many years back. By later that evening, after the evening service had completed, the team had regrouped, and the last moments of fellowship and prayer had concluded, the team returned to the airport and began the journey home with a great sense of future ministry still yet to come.
Please pray for next year’s conference, for the expansion of FirstLove’s free literature ministry to the region, and for the Lord to continue to open doors that would allow us to be a blessing to His people, for His glory! 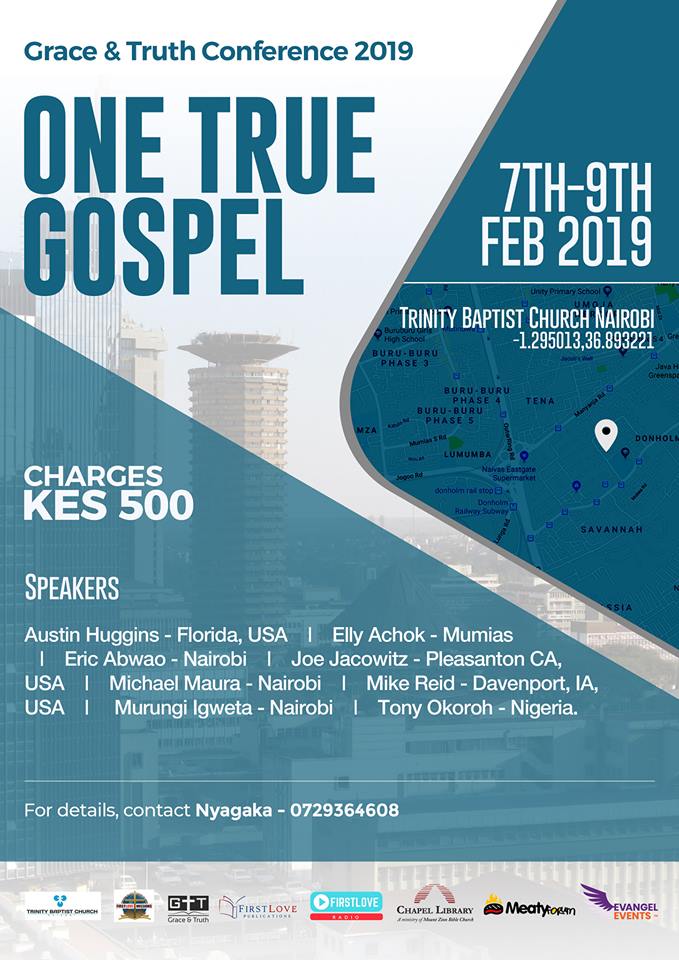